After an entertaining and sometimes chaotic run of group play matches helped (or hindered) by the use of VAR, the quarterfinal field has been set with most of the usual suspects who were expected to comprise the final eight teams in France.

The defending champion United States are the lone non-European side of the bunch, having steamrolled through their group by an 18-0 scoreline before being challenged from a young Spain squad in the round of 16. The Yanks emerged with a 2-1 victory courtesy of Megan Rapinoe’s penalties, but not without a nervy moment or two that could give hope to others looking to take down this World Cup’s Goliath.

The hosts, France, are also in the final eight after seeing off Brazil in extra time. Considered the team best equipped to take down the Americans, Les Bleues will get their chance to do that in arguably the match of the World Cup to this point, a quarterfinal showdown in Parc des Princes on Friday. Corinne Diacre’s side will clearly not be afraid of the challenge at hand, having bossed the U.S. in a friendly in January, winning 3-1 in Le Harve as Kadidiatou Diani recorded a brace.

As the anticipation for that showdown breathlessly builds, six other European teams – Germany, England, the Netherlands, Italy, Norway, and Sweden – also have designs on lifting the Women’s World Cup, starting with Thursday’s encounter between Norway and England in Le Harve. Let’s take a look at each match and all eight teams regarding their chances to advance to the semifinals and their overall odds on winning the tournament. All odds are courtesy the FanDuel Sportsbook. 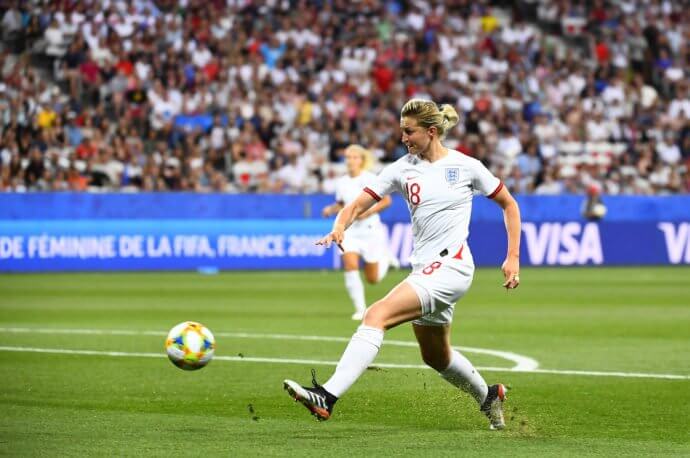 Norway (+260) vs. England (+105) (Draw +240) – Norway (+2,600 to win World Cup) are one of two non-group winners remaining in the tournament as they finished runners-up to hosts France. The Gresshoppene were also the only team to reach the quarterfinals via penalties, eliminating a talented but defensively frail Australia squad in the round of 16.

Keeper Ingrid Hjelmseth made a save during the penalties to help send Norway through to the round of eight for the first time since 2007, but the inability to score in the entire second extra period despite playing 11v10 will be a concern. Martin Sjogren’s team has not had an offensive goal in the run of play in three matches running, with Norway scoring three from the spot and one via an own goal.

England (+650) are seeking their second straight semifinal appearance and are back in the quarterfinals after a contentious 3-0 victory over Cameroon. The Three Lionesses were on the right side of two correct VAR decisions which unnerved the African side, and the cynical play of which Phil Neville’s side were often on the receiving end was one of the few dark spots of this tournament.

This is the second straight World Cup the sides are meeting in the knockout round after England rallied to a 2-1 victory in the round of 16 four years ago. Steph Houghton and Lucy Bronze scored second-half goals 15 minutes apart in that contest, but it has been Ellen White who has emerged as England’s top scorer in France with four of her side’s eight goals much to the thrill of online sportsbooks with attractive sportsbook bonuses. 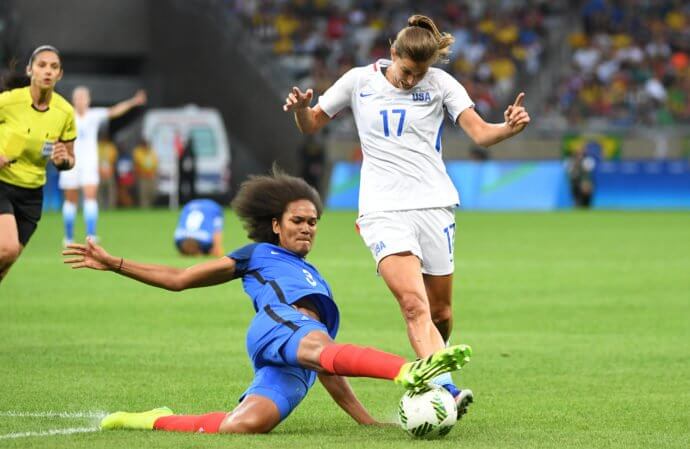 France (+220) vs. United States (+125) (Draw +220) – Ever since the draw was conducted in December, everyone has pointed to this match as the one where the rubber will meet the road for both sides. For the United States (+140), they will put their impressive streak of having reached every World Cup semifinal on the line as they continue their quest for a fourth title.

Jill Ellis’ squad boasts staggering depth, and it persevered versus Spain despite holding out midfielder Lindsey Horan until the 89th minute since she was on a yellow card. Despite her two well-taken penalties, Rapinoe did not have the best of matches on the left flank, and centre-forward Alex Morgan – the current Golden Boot leader – has not scored since her five-goal haul versus Thailand in the group opener.

France (+370) are seeking their second World Cup semifinal appearance in club history and first in eight years. Though Les Bleues had an extra day off heading into this match, the extra 30 minutes they had to play against Brazil likely canceled out that potential advantage. There is also the factor of the pressure of playing a big match as host nation for Diacre’s side and whether the moment will be too big for France.

Yet Les Bleues have won each of their last three matches by one goal, so there is a certain amount of steel in the hosts that cannot be discounted. Henry, Wendie Renard, and Eugenie Le Sommer have accounted for seven of their side’s nine goals, and for France to advance, all of them will have to bring their “A” games to spring the monumental upset. 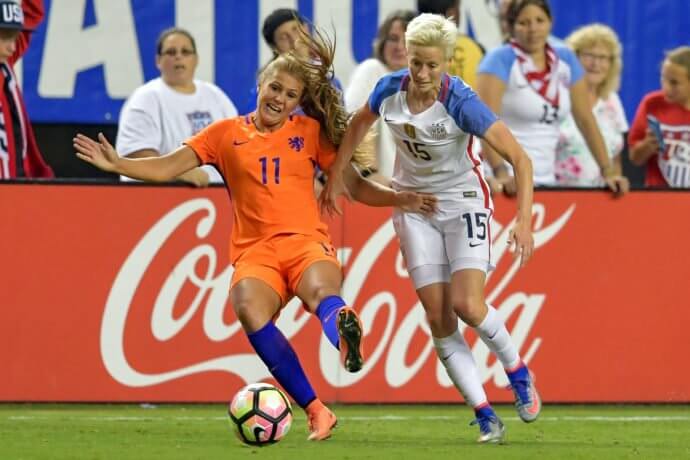 Italy (+250) vs. Netherlands (+110) (Draw +230) – Italy (+2,500) might be the side who best resemble interlopers among the remaining eight sides considering fellow longshot Norway’s World Cup history. Le Azzurre showed their impressive first-place finish in Group C that included Australia and Brazil was no fluke as they were deserved 2-0 winners over China in the round of 16.

Valentina Giacinti and Aurora Galli scored on either side of halftime for Italy, who are seeking their first World Cup semifinal appearance and are back in the quarterfinals for the first time since 1991. Galli and Cristiana Girelli have paced Milena Bertolini’s team with three goals apiece, with Galli matching a World Cup record by scoring all three of her goals as a substitute.

The Netherlands (+800) were the final team to reach the quarterfinals, doing so with a heart-stopping 2-1 victory over 2011 champions Japan. Lieke Martens converted a penalty at the death, but only after keeper Sari van Veenendaal made critical save to keep the Oranjeleeuwinnen in line for their first World Cup quarterfinal appearance.

The hope is Martens’ brace has revived her striker partnership with Vivianne Miedema, who had two goals in group play. Getting this far, though, shows an emerging Dutch side who could be starting a golden generation as they are following up their 2017 European Championship title. 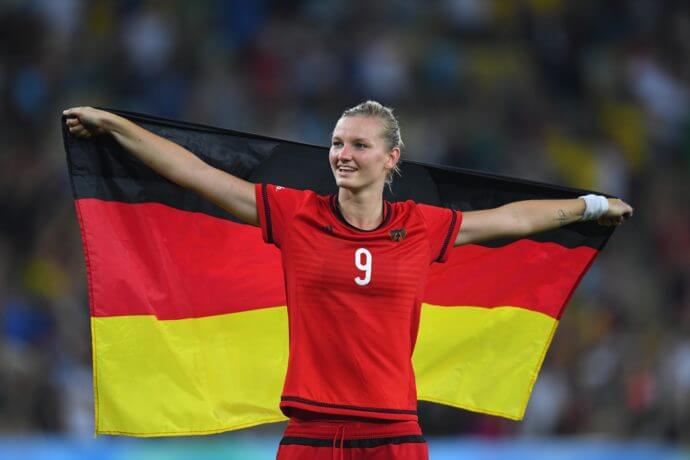 Germany (-140) vs. Sweden (+420) (Draw +250) – The No. 2 team in the world, Germany are the heaviest favorites of the four to advance to the semifinals and have looked every bit the part in France. Die Nationalelf are the only team remaining yet to concede a goal at this World Cup and had little trouble rolling past Nigeria in the round of 16 with a 3-0 victory.

The long break for Germany (+470) between matches – the two-time champions played the first knockout match of the World Cup – could be a huge benefit for star playmaker Dzsenifer Marozsan, who has missed the last three matches due to a broken toe suffered in the group opener versus China.

After finishing runners-up to the United States in Group F, Sweden (+2,100) did what Sweden do best – play compact and strike on the counter – in eliminating Canada 1-0 in the round of 16. Veteran keeper Hedvig Lindahl preserved the slim margin on 69 minutes, stopping a penalty by Janine Beckie.

Both sides are no strangers to this round – Germany are making their eighth consecutive quarterfinal appearance and Sweden are in the round of eight for the sixth time in their seven appearances. Germany sent the Blagult packing four years ago in Canada and also defeated them in the 2003 final for their first Women World’s Cup title, and Lindahl will be eager to avenge Sweden’s 4-1 loss in the round of 16 in Canada in 2015.