Were your NBA Draft bets right? See the total breakdown of the entire first round below. And if you’ve been following the NFL regular season, make sure you’re ready for Super Bowl betting in February.

An impressive, young athlete, Willamson is Duke’s PF and is a strong showing for the #1 draft pick. This 18-year old is known for his fluidity of movement and his good sportsmanship both on and off the court. We’re eager to see which team snags Williamson for their roster because he will likely carry them to new heights in the 2019-20 season.

This point guard from Murray State is fantastically fast and agile, able to keep defenders on a poster while shifting around the court. He has shown great improvement as a sophomore, and we’re excited to see how he performs with the pressure of national league play on his shoulders.

Bet Now
PointsBet T&Cs: PointsBet Responsibility: If you or someone you know has a gambling problem and wants help, call 1-800-Gambler. Visit PointsBet

Another Duke team member, RJ Barrett has the frame and poise of an NBA Athlete. His shooting still has something to be desired, but after watching his ball-handling improve we expect great things from the young Mr. Barrett.

Point Guard from Vanderbilt, Darius Garland is great in the paint and even better when he steps back into the 3-point range. He will be a great defensive asset to whatever team is lucky enough to pick him.

As a Power Forward from Virginia, De’Andre Hunter is said to be the best defender in NCAA ball. With a great shooting percentage and long wingspan, Hunter is versatile and liable to be an asset to any team he finds himself on.

Texas Tech’s shooting guard is a bit inconsistent, which puts him further down in the top ten. However, when you’re thinking about NBA Draft lottery odds, you’re trying to think of all of a player’s strengths and how they match up with your favorite teams’ weaknesses. Culver makes shots for himself all game and is extremely confident on offense.

This year’s Duke roster has three top ten picks for the NBA draft. The first small forward on the top ten picks list, Cam Reddish shines as a talent on the court and is slated by scouts to have the greatest potential of nearly any draft pick.

With one of the best standing reaches in college ball, Sekou Doumbouya is a quality defender and a power forward from Guinea. A bit unnatural as a player, Sekou’s strengths are in his physical profile and his defensive instincts.

Jaxson Hayes, a center from the University of Texas, has a bit of trouble with fouls but is an incredibly efficient scorer. Is confident, comfortable and plays with elegance. However, Hayes could benefit from showing a bit more strength and explosivity on the court if he wants to keep up with professional basketball.

Coby White from North Carolina is a shooting guard sitting at 6’5” and 191 lbs. Aggressive and explosive, White’s intense physicality on the court seems to imply he isn’t thinking critically enough about the game. Still, he has made incredible progress with his passing game this season, and we’re excited to see what he does.

The NBA Draft Lottery usually happens a little under a month before the NBA Draft itself. This year’s lottery is in Chicago and determines the pick order for the drafting season. The top picks go to teams who did not make the postseason play in the season prior. First, a little bit about how the lottery works:

The teams that did not make postseason play last season will be the first 14 teams to choose their Draft picks in the 2019 NBA Draft. From those 14 teams, four lottery picks will get the chance to go first. The NBA Draft lottery is slated to happen on May 14, 2019.

The new lottery system was rolled out in 2019, and this year four top picks will be awarded instead of three. The NBA Board of Governors decided to make this change in order to lower the odds, giving teams a more even chance of getting the number one draft pick. The worst teams get the best odds of the top pick, with the Knicks, Cavs, and Suns all at a 14% chance for first. Sacramento has a 1% chance of landing top pick.

After the first round of picks is finished, the rest is determined by reverse order of the previous year’s record (during regular season play). You will note that betting odds are determined largely by what a team’s pick order is: for example, the Knicks have a 14% shot at first pick, and are slated at +450, while the Sacramento Kings (1% chance of the first pick) are slated at +7000.

There was a new lottery system for the NBA Draft lottery this year, established by the NBA Board of Commissioners. Essentially, another Draft pick was added to the three existing picks. This should even out the odds that normally hinder teams from getting a chance at the top pick.

Zion Williamson, top pick for the 2019 class, is expected to get picked by the NY Knicks (at odds of +450). The highest-ranked of the teams that didn’t make it to the postseason, Sacramento, has about a 1% chance of getting their top pick (odds of +7000). 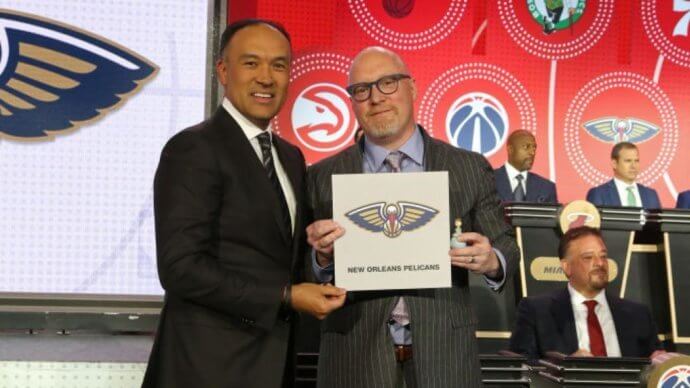 Bet Now
PointsBet T&Cs: PointsBet Responsibility: If you or someone you know has a gambling problem and wants help, call 1-800-Gambler. Visit PointsBet

Betting on the NBA Draft involves a few different kinds of bets, and we’ll lay out a few of the bets you’ll expect to see for the 2019 NBA Draft. In sports betting terms, all of these are “prop bets”; you’re guessing the outcome of a specific decision or random outcome of the draft.

For example, “Will Zion Williamson get picked by the New York Knicks”? As the Knicks are expected to get the first pick and Zion is considered to be the #1 pick, the payouts on these odds are relatively low.

Will the Knicks win first pick?

This one is a bit of a gamble– you will often be given the option to bet on a given team to win a given pick. The Knicks have a 14% chance of getting the first pick, followed by the Cavs, Suns, and Bulls. You’re essentially betting on the pull of a ping-pong ball versus the percentage assigned to the team based on last season’s performance.

Will Dallas keep their first-round pick?

You’ll see a lot of bets like this on bookmakers for NBA draft betting– essentially, as a gambler, you can do some figuring and decide which team will keep their first picks based on strengths, weaknesses, etc.

This year’s NBA Draft will be held at the famed Barclays Center in the Brooklyn Heights neighborhood of Brooklyn, NY.

The 2019 NBA Draft will be streamed live on ESPN.com and NBA.com, as well as being hosted on a number of other streaming sites. In some cases, you may need to enter details for your cable provider.

Also, Hulu and YouTube both have Live TV options with their Plus packages. If you can’t find a free (legal) streaming service online, check out Hulu or YouTube.

How to Bet on the NBA Draft Lottery

If you’re looking to do some NBA draft betting, take a look at the list of bookmakers at the top of this page. Make sure you’re of legal gambling age and physically located within the state that your bookmaker serves. Then, just download the app and/or start an account! All bookmakers worth their salt should be offering rewards programs, promotions, and bonuses.

Above, we’ve listed the best offers available now. Check back with us for more information regarding the NBA draft betting odds, new bonuses, and more!

New Orlean’s Pelicans have snagged the first overall pick for the 2019 NBA Draft. This means they get first crack at signing Draft favorite, Zion Williamson. Below, use the 2019 NBA Draft Lottery results to place your bets on the Draft.