Eleven years later, Cleveland and the Browns are ready for their Sunday Night Football close-up.

Coming off their first victory of the season, the Browns play their first Sunday Night Football home game in over a decade as they host the defending NFC champion Los Angeles Rams in the marquee matchup of nationally televised Week 3 NFL games. How to bet on football can be good to know when watch games.

The Browns (1-1) were last on Sunday Night Football at home in Week 2 of the 2008 season, when they lost 10-6 to the Pittsburgh Steelers. But Cleveland (+148), which is a 3-point home underdog at FanDuel Sportsbook, is looking to build on its 23-3 victory over the New York Jets on Monday night.

Baker Mayfield threw for 325 yards and had the longest touchdown pass of his career, an 89-yard catch-and-run by Odell Beckham in the third quarter that sealed the victory. Beckham shined in his first game back in the New York City metropolitan area since being dealt with the Browns from the New York Giants in the offseason, totaling six catches for 161 yards.

He also had the signature moment of the win, a jaw-dropping one-handed 33-yard catch that set up Cleveland’s first points of the game. The Browns, though, also showed they still have rough edges to smooth out to live up to the preseason hype placed on them this summer and did just enough offensively to beat a hapless Jets team that was on its third-string quarterback for much of the contest.

That mattered little too defensive end Myles Garrett, who recorded three sacks and leads the league with five through the first two games. Garrett has totaled 25.5 sacks in 29 games since being taken with the first overall pick in the 2017 draft and headlined a strong performance that saw the Browns not let the Jets have positive passing yards until midway through the third quarter.

The Rams (-170) have shown no hangover from their Super Bowl loss in February and are coming off a 27-9 victory over New Orleans in a rematch of last season’s conference championship. Los Angeles was efficient and effective offensively as Jared Goff threw for 283 yards and a touchdown while running back Todd Gurley had 63 yards and a score of his own.

Defensive lineman Aaron Donald knocked Saints quarterback Drew Brees out of the game in the first quarter with a thumb injury, and the Rams refused to let backup Teddy Bridgewater find any rhythm as they were the force team to hold the Saints without a touchdown since the Tampa Bay Buccaneers in Week 14 of the 2016 season.

Rams receiver Cooper Kupp had five catches for 120 yards and looks completely recovered from the torn ACL that cost him the final eight regular-season games of 2018 and the playoffs. Kupp has team-highs of 12 receptions for 166 yards, but his versatility allows Rams coach Sean McVay to use multiple play packages from similar personnel groups. 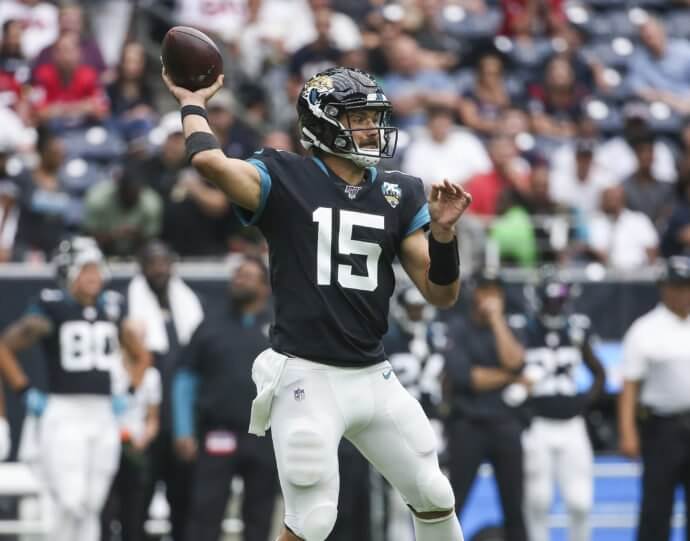 Week 3 begins Thursday night with an AFC South showdown between Tennessee (-122) and Jacksonville (+106), which also provides the first national glimpse of Jaguars rookie quarterback Gardner Minshew. A fifth-round pick from Washington State, Minshew surprised many by winning the backup job in the preseason and was then pressed into duty in the first quarter of Jacksonville’s season-opening 40-26 loss to Kansas City when Nick Foles suffered a clavicle injury on a hit after throwing a touchdown pass.

Minshew has shown a surprising calm for a rookie quarterback and nearly rallied the Jaguars – 1.5-point home underdogs for this contest – to a victory last week at Houston. He pulled Jacksonville within 13-12 on a touchdown toss to D.J. Chark with 30 seconds to play, but Doug Marrone opted to try and win the game on a 2-point run attempt by Leonard Fournette instead of putting the game in Minshew’s hands once more.

Jacksonville, which is trying to avoid its first 0-3 start since 2016, has lost seven of its last eight games against division opponents. The Jaguars have scored more than 12 points in just one of those games and have lost three of them when holding opponents to 15 or fewer.

Tennessee had its chances to improve to 2-0 but came up short in a 19-17 home loss to Indianapolis on Sunday after squandering a fourth-quarter lead. A missed 45-yard field goal by Cairo Santos left the door open for the Colts, who eventually grabbed the lead with 4:38 to play.

Marcus Mariota had two chances to engineer a game-winning drive for Tennessee, with the last one ending on an incomplete pass at the Indianapolis 45-yard line. Mariota had difficulties sustaining drives all game as the Titans went 1 for 10 on third down, and the 10 third-quarter points they scored came on drives that originated in plus-territory.

Tennessee swept the season series last year, holding Jacksonville to one touchdown and 15 points in the two victories. Last year’s game in Jacksonville was decided by the kickers, as Ryan Succop’s 28-yard boot with 4:06 to play lifted the Titans to a 9-6 victory.

The Titans have won four straight and six of the last seven between the teams, with Jacksonville’s last win coming at home in 2016. 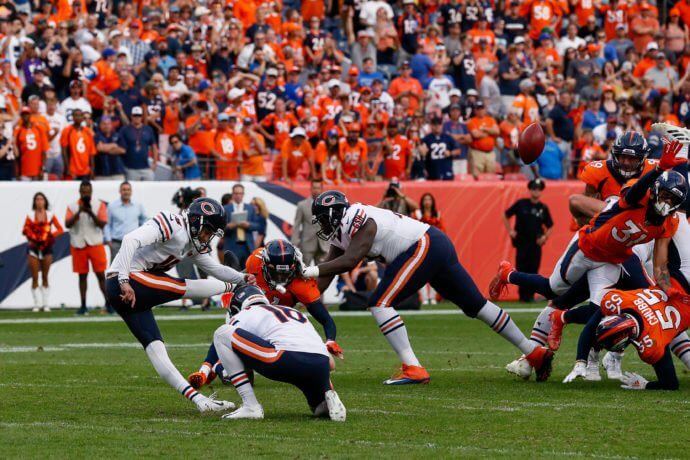 Week 3 concludes with the Chicago Bears (-196) looking to get over .500 for the first time on the season while keeping the Washington Redskins (+168) winless in the nation’s capital. Chicago, which is a 4-point favorite, was fortunate to emerge with a 16-14 victory at Denver last weekend after Eddy Pineiro booted a 53-yard field goal as time expired.

Bears quarterback Mitch Trubisky struggled for the second straight game, overthrowing open receivers at times, but engineered the game-winning drive. He got a huge boost from a controversial 15-yard roughing the passer penalty before firing a 25-yard completion on fourth down to Allen Robinson that set up Pineiro’s heroics.

Pineiro’s high-pressure kick made him the instant toast of Chicago, with the city still raw after last year’s wild-card loss to Philadelphia after Cody Parkey’s “double-doink” hit the upright and crossbar before falling short.

The Redskins are wrapping up a brutal season-opening gauntlet that has seen them play half the NFC playoff field from last postseason. Washington suffered both its first two losses to division rivals after a 31-21 home setback to Dallas last weekend.

The defense was shredded for 474 yards and the secondary torched for three passing touchdowns for a second straight contest as Dak Prescott and Ezekiel Elliott took turns finding weak points in Washington’s defense. The Redskins yielded 63 points and 910 yards in the first two games, and their shortcomings on that side of the ball have canceled out a strong start to the season by quarterback Case Keenum.

Keenum, who is essentially a caretaker while first-round pick Dwayne Haskins learns the offense, has thrown for 601 yards and five touchdowns without an interception in the first two games while completing 69.1 percent of his passes. Washington’s ground game, however, has struggled mightily with just 75 yards on 2.5 yards per carry.

Redskins coach Jay Gruden has yet to find a No. 1 back between Derrius Guice and Adrian Peterson, with Peterson getting just 25 yards versus Dallas after Guice was held to 18 in the season-opening loss to Philadelphia.